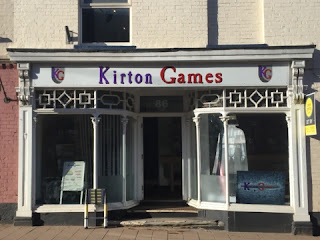 This past weekend saw the return of normal X-Wing competitive play to the South West with the Kirton Summer Hyperspace. 16 players (mostly from Tin Squadron) traveled to Crediton for a full day of |Pew-Pew and plastic spaceships. I attended alongside Pete, Troll, Matt V and Captain Rex.

My list was... simple. I had only decided to attend about two weeks earlier and have largely ignored the Hyperspace format during the Pandemic. What could go wrong?

I scanned through which ships were legal for the Empire in Hyperspace. Only named Interceptors, only generic Advanced, no Shuttle. Madness. I would have flown Interceptors, but the available Modifications left a lot to be desired. A mod that changes the K-turn into a Sloop, but only if its a speed that the dial doesn't have? Take damage on my three hull ship to remove a stress? How about I don't. This lead me to looking at the TIE Striker. Suppressive Gunner seems expensive but it can really mess with an opponent. Thermal Detonators can do the same, but seem cheap.

I had tried pairing the three of them with Soontir Fel but wasn't happy at all. I'm rusty flying a lone Ace and he doesnt punch hard enough alongside them. Last minute inspiration had me looking at the TIE Brute. Keep it simple and add an Ion Cannon for some extra annoyance. Finally throw in a Baron of the Empire, with some upgrades because the bid doesn't matter for this list.

I managed to get a couple of games in last Thursday, so I at least knew what I wanted to be trying to do with the list. And we rocked up early Saturday morning ready to go

And my first match was against Troll. Not only someone I traveled with, but one of the two practice games I had on Thursday. A very cagey game, he doesn't want to get caught by my bombs, I don't want to get punished by Foresight. Bits of damage traded here and there and the game was looking quite even until the penultimate round. An Inquisitor took a stray crit, Troll flipped a Direct and it left the table. A shot into a second full health Inquisitor had Hit, Hit, Crit versus triple Blank. Followed by flipping another Direct. Taking those two off the table with only a couple of minutes left on the clock meant Troll couldn't get enough guns on my survivors to bring the score back

My takeaway from this game was that it was a very grindy match up. Both sides trying to minimize how many shots are aimed at any one ship, both sides trying to position so that they aren't punished by opposing upgrades. A little bit of luck secured the win for me.

My second game was against Rick of the Tins. I made too many mistakes in this game, to be honest. Flew a Striker through a Debris Cloud, forgot the stress a couple of turns later. That didn't cost me the ship, but put it out of the fight for too long due to the maneuver I had dialed in. Spotted the stress as I went to activate the ship and realized i wasn't going to get my Ailerons bank. Misjudged some positioning as well throughout the game. And Rick capitalized every time. Also, Seevor's ability to Jam meant my Strikers never had an Evade so evaporated pretty quick.

High point was taking out Torkil pretty quickly. But once I lost two Strikers, I knew I wasn't going to be able to do enough damage to either Firespray to get points for them. Gave it a go though.

My takeaway from this game was mistakes are costly. Sounds obvious, but you really need to focus. Especially against a player like Rick, who just missed out on the top 4 cut.

My third game was against one of the many Burnett's amongst the Tins. In this case, Mat. A very strong set of Scum ships and upgrade combos to boot. Not my preferred match up when I've already had a loss. This game was fun though, despite my trepidation. Highlight was managing to get 3 Ion tokens onto Bossk while he was pointing at the edge of the board. He was still on (and at an angle) by mere millimeters. Fortunately (for Mat), the hard turn kept him on board and I didn't have enough firepower left as he got the half points for my final two ships in the last round. Losing that Bossk (who was pretty healthy) would have sown up the game for me.

My takeaway from this game is difficult. I killed Torkil and got half the Bounty Hunter. I can't pinpoint exactly where it went wrong. Zam wasn't really a factor in the game. It's possible I simply wasn't doing damage quickly enough.

Mobile ships and a hammer. This turned into a slow game, not due to stalling but due to all the ships not really wanting to get into a fight. The occasional shot here and there, Blaze's Procket dice not being great, me not taking enough shots at Hera, these all caused it to look on paper like a non-game. Two ships halve on both sides meant a very low score for both players.

My takeaway from this game is twofold. Firstly, I should have tried harder to fly aggressively at Hera. Her lack of Agility meant I probably would have burnt her down sharpish. Secondly, the named A-Wings feel a little cheap. I guess we will see if AMG agree when they adjust the points later this year.

Final round and I'm up against Matt V, my other practice game from Thursday. Full disclosure, he wasn't fully invested in winning this game. I just wish someone had told his dice, as the Red's didn't have blanks on them. My Red's fell asleep but the Thermal Dets put in some work. I also flew super aggressive and managed to catch Major Vonreg early. In the final round, Matt chose to not spend a Force on Kylo's defense roll to give me the win and allow him to grab the Wooden Spoon

My takeaway from this game involves lessons from the Thursday game. In that game, Matt split his aces and the Strikers we able to keep on one of them til I destroyed it. This game went similar, except i flew more aggressive to give Matt minimal chance to get it away. The bombs not only present damage that ignore Agility, or Strain to lower Agility, but the flexibility of dropping them on the 1 or 2 Straight OR both helps keep aces honest. I expect Thermal Detonators to go up a point or two.

Not the best result, but I'm not upset. First tournament in two years, last minute decision and I don't massively expect good results at the best of times. This was mostly an excuse to hang out with the guys and see/play people who I haven't been around since before the Pandemic. I consider it mission accomplished.

As usual, James Fox ran a fantastic event, and i highly recommend attending a Kirton tournament, no matter the game you play.

If you want to see how the good players were playing, check out https://www.twitch.tv/videos/1124944961 . Shout out to Pete for being top of Swiss and not losing a game until the Final.